WHAT HAPPENED TO THE CRUISE?

Before the floods washed away our plans, we anticipated a cruise to remember. The boat was booked and we had a full complement of eager passengers, all we needed was good weather.
Each year our members have cruised on the barge Victoria. After last year's celebrations at Springfield Basin, it seemed the obvious, though distant, destination. After all, what is a canal basin without boats? We wanted to highlight it's advantages.
A long trip like this was going to be a big commitment. At first, we wondered if enough people would come. We mailed our members, and published on The Web. Chelmsford Borough Council lent us poster space and articles appeared in the IWA magazine and Essex Chronicle. We soon had more takers than there was really room for!
Everything was looking fine until the Easter Bank Holiday weekend. We watched the river levels with concern, hoping that we might still be able to go ahead. Essex had not flooded the way the Midlands had. But by Thursday things were looking bleak. Lynn from Chelmer Cruises rang me at work. "The river is the highest I have seen it - and it's rising fast! I've got water flowing past my door! We'll know for sure tomorrow but there's a 90% chance that we'll have to call the trip off. I'm sorry."
The next call was from my wife, "The Weekly News have just published that the cruise is on, and that people should turn up at Paper Mill lock if they want a boat trip!" That was a very old press relaese! If only they'd checked!
On my way home from London, I looked with some envy at the Lee navigation's normal water levels. The one advantage afforded by the many huge and ugly open storm drains which snake through the Lee Valley. Further allong, the River Roding was swelling to embrace the golf course beside the M11 motorway.
Friday morning confirmed our worst fears. The road at Paper Mill had been closed due to flooding and the car park was under water. There was nothing for it but to make frantic phone calls to all the people hoping to make the trip. Not having everyone's phone number we asked BBC Essex to broadcast a warning, and volunteers were posted at each departure point to explan and apologse to anyone who turned up.
Early on Saturday I saw Paper Mill lock. The water had gone from the road but it still gushed over the lock gates. The weirs seethed with white water. Sue, the lock keeper, was walking her dog. "Oh I don't think you could get up to Chelmsford today!" she said. Well, No. But we will another day - if the weather is kind to us on September 26th.
William Marriage.

PLEASE NOTE
26/27th September is also the new date for the "Basin Bash" see this issue for further details.

LANGFORD NOT CUT AND DRIED

Further investigations using Peter Came's thesis on the navigation (Essex Records Office) have revealed that Langford Cut was begun in March 1792 by the then Mill owner Mr. Westcombe who bought the land between his mill and the River Chelmer to a point just opposite Beeleigh Mill . He began digging in November of the same year and in July 1793 had reached the Chelmer estuary.
Casting his eye to the east he saw the cut being commenced by the Chelmer and Blackwater Company from the course of the River Blackwater (opposite Maldon Golf Club House) to the River Chelmer. On closer inspection he discovered that the bed of the navigation cut was two feet lower and also that it was on course to cross his own cut. He summoned John Rennie to an urgent meeting.

Westcombe maintained that, as he owned the soil in the area where the two cuts crossed his was as important as theirs and therefore he was not obliged to sell it to them as the Chelmer and Blackwater Navigation Act had stipulated.He maintained that his rights to make a cut were as valid as theirs! Even more the C&BN might decide at a later date, he said, to charge his boats tonnage for crossing theirs and his cut! The C&BN Co., represented by Mr. Rennie, agreed compensation terms: Langford Cut to be made two feet deepe r and a pair of gates fitted between both cuts and the River Chelmer at Beeleigh.
To be continued... Dudley Courtman

NATURE AND THE NAVIGATION

The urge to explore a length of river is present in all of us. you stand on a bridge and wonder what happens around the next bend - exploring the natural environment is compelling. Our waterway starts with the feeder ditch from the River Chelmer next to the new multi-storey car park in Wharf Road, Chelmsford. Where plants and fish that like fast flowing water abound: then into the Springfield Basin where there is a sombre change of mood caused by the water's depth and stillness: this encourages surface weed to grow and harbours bottom feeding fish like carp and tench. At the first lock we meet the River Chelmer for real and join its meandering course across low floodplain meads, home of the skylark and grazing cattle. To the mill where stream and weir encourage the kingfisher and grey wagtail to feed, not to mention the summer swallows who love to skim insects from the wide surfaces.
Beyond Barnes Mill we are joined by sentry posts of willow trees, some tall and some very small to replace those taken to make cricket bats.
At Sandford we are reminded that our needs are met by the river; to the right the former Chelmsford Waterworks, to the left of the sewage works. How important it is to protect the water quality for ourselves and its plants and animals. We all need oxygen to survive including the underwater fish and insects. A rogue pollutant can quickly destroy the delicate balance that sustains the food chain: water plants convert the sunlight and carbon dioxide in the air into carbohydrates which power their life process and release oxygen into the water. The food reserves of the plants feed the insects which feed the fish which feed the heron and kingfisher. A mutual admiration society food chain!
The plants provide nesting sites, cover and food for insects and fish. Weed beds are home for spawning fish and emergent insects. Next issue will have information on plants, birds and fish to look out for further down stream. 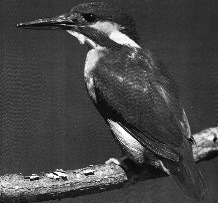 ANGLING AND CANOEING ON THE NAVIGATION

The "Friends" were hosts to Maldon Angling Society and Chelmsford Canoe Club on Wednesday 22nd April at Langford and Ulting Village Hall.
Those present were entertained and informed by Hugo Bibby from the Society and Mike Lewis from the Club. Both speakers were very experienced devotees of their respective past times and knowledge .It was a happy and relaxed evening made pleasurable by the humour and clarity of two excellent presentations. For those of you who could not be there, here are a few snippets to keep you updated on what you missed.
Hugo informed us that there are three types of anglers: those that like to catch large fish, those that like to catch a lot, and those that just like an excuse for sitting quietly in a beautiful spot. Stretches of river and mere's are expensive to lease and have to be conserved, this takes the form of restocking, removing dead trees, planting pond weed and clearing litter. Some large fish weight up to 30lbs and become legends in their own lifetime: they have names like Goddess, Cedric and Nigel and if caught are carefully returned to the water.
The Society displayed an impressive array of cups and photographs establishing their long links with the locality and their great concern for protecting and conserving the habitats that have served then so well since 1894.

Mike from the Chelmsford Canoe Club could not match such a distinguished heritage having just celebrated their 50th birthday. Mike, a member for over 30 years was able to tell us how it all started in canoes on the navigation.
First there were canvas hulls with wooden frames, followed by glass fibre and polyethylene - a technological revolution. There were long, short, wide and thin boats: all designed for special activities.
Some might prefer a kayak, others a canoe; in which case you would need a double or single paddle. You could tour gently, race madly, turn sharply or just explore purposefully.
Like the anglers Mike felt that the canoeists were privileged to enjoy the wilderness and should treat it accordingly. Canoeing is exiting and only dangerous if you haven't trained properly for the activity you choose.
Dudley Courtman

The "Basin Bash" is also a re-scheduled event, cancelled from last year. Details will be sent out to the boats that registered. .Posters will be pinned up along the navigation with details and how to register Details from Judith Abbott on 01206 853282 or Rebecca Loader on 01621 854095. 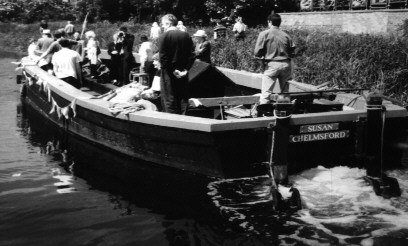 SHORT CUTS TO THE C&BN

PART 5
Cuton Lock:
This lock, restored in 1995, has a pill box beside it, from the second world war and was part of a line across East Anglia protecting London. A few hundred yards below the lock, on a sharp right hand bend, a foot path leaves the towpath to lead under the A12 to Cuton Hall. Turn right at the Hall to follow the path to the White Hart at Springfield. On the other side of the road is Sainsbury's supermarket.

Stonham's Lock:
A peaceful and remote location. Keep to the left as you as you approach the lock to avoid a fast flowing weir. Just before the next right hand bend as a good spot to moor, with a track leading via the historic Boreham Hall to the village of Boreham. Turn right on reaching the village street. The Queen's Head Public House stands beside the church and there is a choice of Inns for evening meals at the top of Plantation Road. Or you may prefer to visit Boreham from the next lock.

May 16th:
Susan's voyage to Springfield

July 8th:
AGM at Langford and Ulting Village Hall at 7pm. Guest speaker is Miss K. Potter talking on the "Aspects of the Chelmer and Blackwater Valleys".