The Chelmer and Blackwater Navigation Company

(An address given by Keith Moodey,General Manager, at the AGM of The Friends at Moulsham Mill on July 7th 1999)

The management of the navigation company involves reconciling the demands of a commercial enterprise with those of the present day users. It is not always a straightforward task. The advent of CAPS has been of considerable benefit and has presented an excellent opportunity to greatly improve the maintenance and restoration works and open up other possibilities. Whereas assistance with funding is always to be welcomed the company still has to find thirty-five per cent of the total amount which is not a small figure and budgets have to be kept necessarily tight. The problem is exemplified by the restoration of Ricketts weir where continual unplanned and unavoidable setbacks contributed to a finishing cost in excess of one hundred thousand pounds, the vast majority of which was paid for by the company. The schedule of repairs is now proceeding as planned with work to Little Baddow lock being just completed, and Ricketts, Hoe Mill and Sandford in the pipeline; at the end of next year the whole programme of works should be completed and thereby a seven year respite will begin when energies can be applied to other things.
The dredging operations will be on-going throughout; the importance of this was illustrated by the recent voyage of Victoria from Chelmsford when progress was slow in places. The navigation is fourteen miles long and dredging is only one of the seasonal maintenance tasks that have to be undertaken. All such work is over and above the demands of the CAPS commitment with a workforce of just seven men. So it is unavoidable that repairs to things like banks, towpaths and gates have to wait their turn in the natural order of things. We are trying to conserve what we have and will not be attempting ambitious new projects to attract the public-no bouncy castles at Paper Mill for us.
Development will be measured and contingent with preserving the intrinsic value of what we have already achieved over many years of sensitive management.To provide pleasure for everyone we need fee paying customers and one response will be to develop operations and improve facilities at Springfield Basin and Heybridge Basin.
Increased use of the navigation will increase the need to keep the channel free in the summer months. A weed boat has been obtained to assist us with this task.

(An address by Paul Skeet ,Grants Officer,Essex County Council, at the AGM of The Friends of the Friends of the Chelmer and Blackwater Navigation, held at Moulsham Mill on July 7th 1999.)
Essex County Council has aided the Chelmer and Blackwater Navigation Company in their efforts to maintain the infrastructure of the waterway for most of the 1990's.Up until 1997 they, in conjunction with English Heritage provided '30-40,000 in grants. From 1998 '150,000 is to be made available from the Heritage Lottery Fund via the CAPS funding mechanism initially for repairs to locks and bridges: this sum to be matched jointly by the CBNCompany, ECC, Chelmsford Borough Council and Maldon District Council. The use of public money to help finance a private company is unusual and is an acknowledgement of the good work that the CBNCo has done in preserving the navigation for public use.
Percentage grants from the contributors are set after surveys are carried out as the unique nature of the works and prevailing weather conditions makes estimation a fine art. Access problems can also distort costs appreciably. A start was made with repairs to Rushes lock in June 1998 and continued during the winter with the rebuilding of Ricketts weir followed by Little Baddow lock. Work will continue until 2001 on a programmed basis.
Aspects of landscape improvement are included in the scheme. Such enhancement will assist the transition of the waterway from a commercial focus to one of leisure. Tree planting is envisaged in areas exposed to the intrusion of transport and new building development features. It is hoped that some fields adjacent to the waterway can be restored as water meadows and thereby encourage the growth of former diverse habitats-assistance is to be sort from the Ministry of Agriculture and Fisheries. In time the original clapper gates connecting the meadows along the towpath are to be reinstated although thought will have to be given to how they can be made user friendly for everyone.
Recent works have been carried out at Beeleigh where the brick bridge to Maldon Golf Course has been sensitively restored. As was the case with Ricketts weir traditional materials were used. This whole area has much scope for creative restoration as it has the original Beeleigh steam mill and the Museum of Power at Langford in close proximity. It has to be acknowledged that preservation, changes in farming practices and the demands of the recreationalists pose a potential conflict of interests. Management will involve the careful handling of some delicate issues.

The Executive Committee met seven times during the year when the following matters were planned, considered and carried out: The past year has been one of much progress on many fronts. We have established ourselves as an expert and committed body in caring for and about the navigation. Our work has been rich in learning experiences, will bode well for continued development. 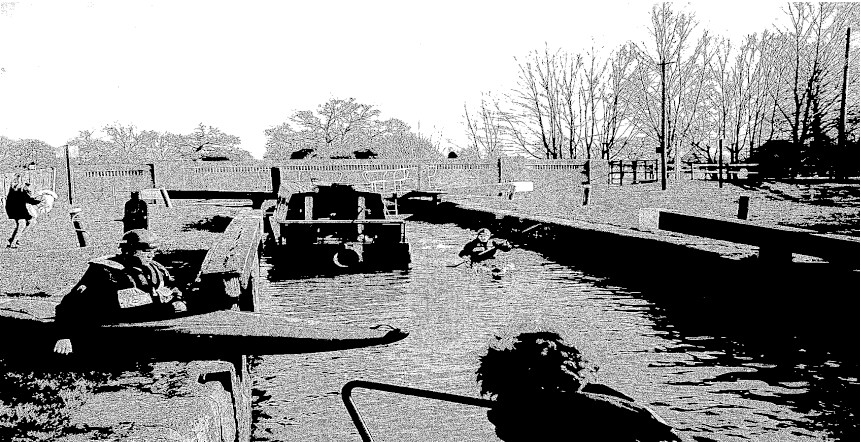 The bridge just below the lock has restricted headroom, especially after rain, approach with care!. As with all bridges on the canal, only the centre channel should be used by motorised craft. Beyond the bridge on the left is a house which was used for a film which Stratford Johns appeared. There is a long straight reach, at the end of which, where the canal turns left, quiet moorings may be found, and a footpath leading to Danbury Hill.

Another remote and idyllic situation, recommended for overnight mooring if you are prepared to cook supper aboard or take a longish walk to the nearest hostelry. From the footbridge over the canal, a little above the lock, a bridleway runs south towards Danbury Hill, or north to Bumfords Lane. By turning right onto the lane, and left along a footpath beside the River Ter, a pleasant walk may be made to Hatfield Peverel with its shops, pubs etc. (about 3 miles). Between Rushes Lock and Hoe Mill you will pass the tiny (45 feet long, 18 feet wide) parish church of Ulting, in its sylvan setting among gnarled old trees on the waterside. Originally 13th century, the church was restored in 1873, but has lost nothing of its ancient charm. Look out for the carved mouse on the top rail of the gate leading into the churchyard.

Because you
Control the flow
And the navigation
You think your something,
Lying there
In your deep and narrow slot
Your black limbs
Stretched carelessly
Across the way
Forcing us over or around
You certainly think your something,
Your gleaming surface
Filling the space made for you
To the brim,
Framed so nicely
By your stone-edged sides
And placid waiting ways.
You think you're something,
And we cant but
Fall for you,
And long to try
Your working parts.

Coates Cuttings Copy Dates
Articles in before 30th December
Next edition in the New Year!